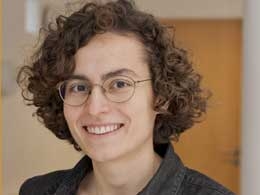 Abstract:
Collective dynamics of coupled slow-fast oscillators have a great importance in the context of physiology when microscopic and macroscopic levels can be represented as relaxation oscillators. Synchronization of multiple timescale systems may involve synchrony of fast timescale dynamics, spikes, and/or slow timescale dynamics. In this presentation, we focus on the effect of canards on collective dynamics of an extended version of a neuroendocrine model which accounts for the alternating pulse and surge pattern of gonadotropin releasing hormone secretion. The model is formed by two FitzHugh-Nagumo oscillators that evolve on different timescales, with a feedforward coupling from the slow one (regulator) to the fast one (secretor). Global and local features of the resulting 4D three timescale model have been studied in the context of slow-fast dynamics and MMOs where folded singularities and associated canard trajectories have a particular importance. For instance, so-called secondary canards due to a folded node are responsible for the presence of a plateau with small oscillations in the model output, after the surge and before the pulsatility resumption. We extend the model to 6D by adding one more secretor and focus on the slow-fast transitions in the presence of coupling. We explore the influence of the relationship between canard structures and coupling on patterns of synchronization and desynchronization. We propose two different sources of desynchronization, induced by canards near a folded node and canards near a folded saddle, respectively.

Abstract:
Computer models of the heart are of increasing interest for clinical applications due to their discriminative and predictive abilities. However the number of simulation parameters in these models can be high and expert knowledge is required to properly design studies involving these models, and analyse the results. In particular it is important to know how the parameters vary in various clinical or physiological settings. In this paper we build a data-driven model of cardiovascular parameter evolution during digestion, from a clinical study involving more than 80 patients. We first present a method for longitudinal parameter estimation in 3D cardiac models, which we apply to 21 patient-specific hearts geometries at two instants of the study, for 6 parameters (two fixed and four time-varying parameters). From these personalised hearts, we then extract and validate a law which links the changes of cardiac output and heart rate under constant arterial pressure to the evolution of these parameters, thus enabling the fast simulation of hearts during digestion for future patients.