Title: How to train face morphable models with non-intersecting subspaces? 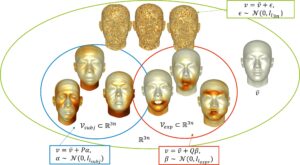 Abstract: This presentation shows how to learn deformation spaces for 3d face meshes. Typically, a first deformation subspace encodes the possible identity changes while another encodes the possible facial expressions. It has been proposed to jointly use two Principal Component Analyses (PCA) to find these subspaces. PCA chooses the basis vectors pointing in the direction of maximum variance when the input shapes are transformed in these low dimensional subspaces. However, PCA produces an intersection between the subspaces for expressions and identities. The problem with this intersection is that modifying facial expressions will also modify the person’s identity and limit such models’ usefulness. Therefore, we formulate an optimization problem penalizing subspaces’ orthogonality. Then, we propose an iterative procedure to solve this problem. Our approach ensures a quasi-orthogonality between the subspaces and improved facial attributes and expressions manipulations of existing models.

I'm a PhD student in applied Mathematics since 2019 under the supervision of Madalena Chaves from Inria and Jérémie Roux from IRCAN. Together, we model a form of programmed cell death (apoptosis) triggered by anti-cancer drugs with deterministic systems, to understand fractional killing, a form of cellular persistance, and the associated cell sensitivity states, at the origin of many therapeutic failures in the fight against cancer.
View all posts by Marielle PERE →